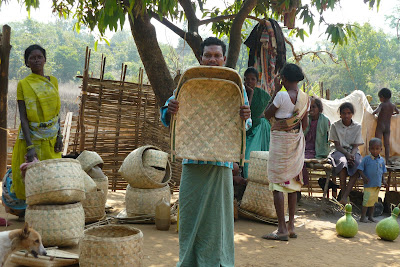 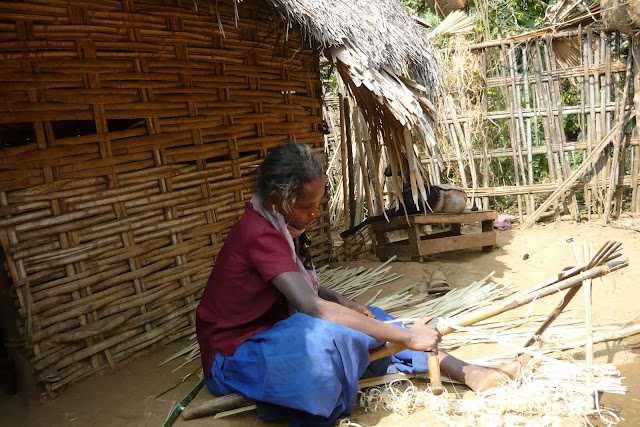 In addition for making articles, those tribal communities use bamboo for various other purposes, as follows:
Long tender bamboo culms preferably Bambus Arundinaces (Mullu veduru, Telugu Vern.) are used for toddy trapping After harvesting the bamboo its outer skin is peeled out and allowed to dry for 1-2 days then,  it is cut at each node, cleaned and then baked in fire to get a fine finish.  They prefer culms of gbh more than 30 cms.  This processed bamboo culm is then used for collection of toddy which has a special taste and hence fetches the higher price in comparison to other collection materials unfortunately, this bamboo is locally extinct any they have to be imported form Maredmilli (East Godawar) forests.  This has led to the replacement of Bambus arudinacea with D. Strictus for toddy trapping leading to slight bitter taste and hence reduced income.
From discussions with the tribal people, it was evident that they were facing severe shorage of Bamboo (D. Strictus)as indicated by the longer distance they have to travel now (2 – 4 Kms) to collect bamboo in comparison to 50 m.  about six to seven years back.  They feel that the entry of ITC – BPL in the harvesting scene has led to this problem.  Even though the entry of ITC – BPL has provided a source of income as they do go as labour for felling bamboo during felling period, road repair works for coupes,  it cannot be denied that the traditional bamboo crafts earn extra income especially during the dry season.  They complain that the outside labour brought by ITC – BPL from elsewhere (from M.P., Orissa and East Godawari Dists) simply chop off all culms of the clump, and they cut the culms in a  “ V ” shape as being easier for them.  This can result in accumulation of water leading to fungal growth, making culms more prone to pest attack ultimately leading to the early death.
The Indiscriminate felling of forest tree in the reserve forest area for podu cultivation along with reduced fallow period has led to loss of vegetal coger in the slppes, obviously leading to soil erosion and nutrient loss.  When they were asked why they cannot avoid this type of cultivation, they simply say “ Provide us land we will stop podu ” and blame government authorities who come with many promises providing land etc. but never implement any.
Bamboo requirement for the Kondareddis is according to their family size.  If the family size above 5 members they requires 10 bamboo per week and family size below 5 members require 5 bamboo per week.  So according to the current population estimate, it could be calculated that kondareddies required about 8064 tender culms per year for their regular earning.   So as to continue their traditional practice.  However, this practive is gradually vanishing, as the younger generation takes prefers to go as daily wage labour or couple labor for quick money, especially in the past seven years.  Money provided by the ITC – BPL authorities seem to keep the tribals happy as they are paying a flat rate of Rs. 225/- for a stack with size of 2m X 2m.  Hence, there is an immediate threat that the skilled workers who can make specialized articles like square shaped winnowers, Common winnowers, grain storage bins will decline in numbers.  For instance, the study village today has only six skilled workers out of which three are above 75 years of age. 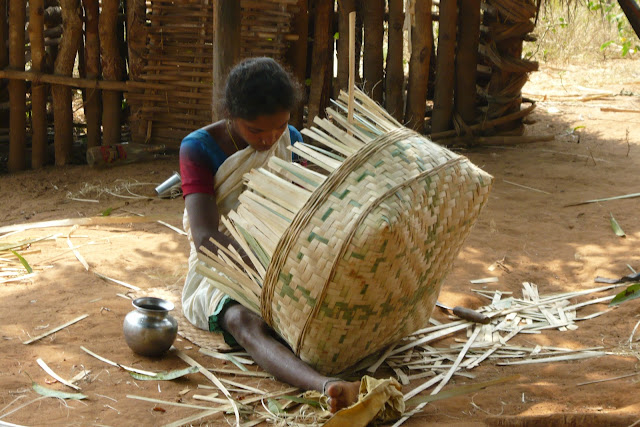 A major change which was noticed in the tribal communities of the village was shift in dietary habits.  As of now kondareddies and koyas have given up eating tubers, wildroots, mango kernels.  Now there have become the dry period food stuffs.  Due to flow of cash and also availability of credit from the merchants, during cutting season rice which in the past was a rare delicacy has now become the staple food.  Besides consumption of rice, the consumption of dried fish, and tobacco is also taking place.
During rainy season tender bamboo culms are delicacy which is made into a vegetable curry tasting like cabbage. Now this is being avoided as it is causing allergic complaints.
A Interesting cultural interaction can be seen between the Koyas and Kondareddies.  Koyas go for marrainge of Kondareddis and also lunch with them but Kondareddis though atted koyas marriages they don’t eat in there houses because koyas eat beef.  This cultural interaction is seen only at places where tribal coexist whereas at other places they do not interact culturally.
TABLE – VARIATION IN CLUMP MOUNDING AT DIFFERENT STUDY SITES IN
IN BHADRACHALAM (S) DIVISION
TABLE – VARIATION IN CULMS CUTTING SHAPE AT DIFFERENT STUDY
SITES IN BHADRACHALAM(SOUTH) DIVISION.
TABLE: VARIATIONS IN NODAL CUTTINGS & CLEAR FELLED CULMPS BETWEEN DIFFERENT STUDY SITES
TABLE –    BAMBOO REQUIREMENT OF KONDAREDDIS
TABLE   –     MAKING BAMBOO ARTICLES –   SOME BASIC DETAILS 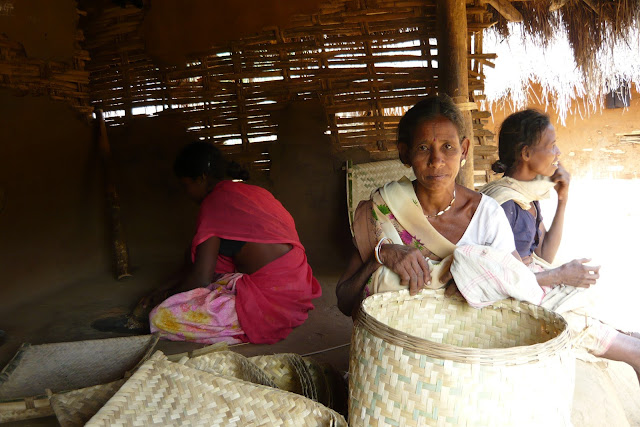 CONCLUSION:
The Present Study clearly reveals that regeneration is more affected at the ITC-BPL site, in comparison to Forest Dept. site.  This is due to apparent negligence of management practices like mounding and clear felling of the clumps by the former.  Over harvesting should be avoided at both the sites (more so for Forest Dept.) as other –wise, days are not far off to see bamboo in Botanical gardens.  Prasad and Gadgil(undated) say that bamboo available to the paper mills in India has been overestimated and this has resulted in practices of clear felling of clumps leading to sharp decline of bamboo resources.  The present study has also indicated a similar trend i.e. previous to industrial extraction; the tribals were getting the bamboo for their requirements in less time and also by traveling less distance.  Hence, appropriate sustainable harvesting and management strategies have to be adopted by both ITC-BPL and Forest Department as it has been already discussed in.