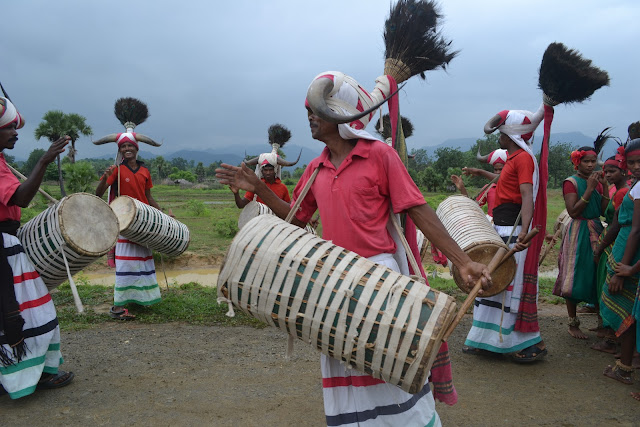 UNIONISATION OF YOUTH LOADING LABOUR  IN CHINTURU MANDAL
INTRODUCTION:
The CHINTURU Mandal formed on 20.5.1985 and  this Tribal area consists of  15 Grama Panchayaths.  Its borders are Chattisgadh and Orissa towards north, V.R.Puram Mandal towards the south, East Godawary towards the East and Bhadrachalam Mandal towards the West. Eastern Chinturu was separated from its western part by the river Sabari.
The total population according to 2011 census is 45,401.  Out of this the Tribal Population is 78.01% the SC population 15% and the others 6.99%. The Mandal has spread into 118 villages of 15 Grama Panchayaths. The Tribals of this area are Koyas, Kondareddies and Naiks.  It is hilly area covered with thick forests containing more than 30varieties of commercially important trees.  The average rain fall is 900 to 1100 mm.   The state highway from Khammam to Bhadrachalam passes through Chinturu and to Visakhapatnam and Rajahmudry.  Besides the river Sabari the other tributary rivers which merge with SABARI in the mandal are Sileru and Sokileru. Sabari flows towards west side of this part of Chinturu and Joins in Godawari River at Kunavaram (this was where Sabari offered sweet fruits to the Lord Sri. Rama, according to Ramayana.)  Few nontribal farmers migrated to Sabari belt area for cultivation they gradually occupied major part of this area on lease basis.  Three Hydroelectric power projects are there on Seleru river in Andhra Pradesh, Polluru in Khammam district, Donkarai in East Godavari and Upper Seleru in Visakha Dist and Chitrakonda in Orissa.
ACTIVITY:
This year Governments has been started huge and number of development programmes in Chinturu Mandal under different schemes. Under these schemes there are construction of Buildings, Check Dams, Roads and Tanks etc; etc given to the Contractors and sub Contractors.  All these constructions need construction raw material which is available cheaply from nearby river and forest areas i.e. Sand, Loose soil, Red soil,Gravel, Metal and Wood-Cement, Iron etc; requires lot of transporting. Contractors get supply of sand and soils from near Sabari RIVER by the local suppliers/transporters.
It is estimated that nearly 100 Tractors are supplying the Sand, Soil, and Metal to the constructions in the Mandal. In this context the following factors were observed for intervention:
TRANSPORTERS/OWNERS OF TRACTOR:

Among the 100 Tractors estimated in the Chinturu Mandal only 20% trucks have the legal documents.

Only 20 % of vehicle Drivers has Driving Licenses.

There is no Union for the owners of Trucks.
TRACTOR DRIVERS:

Only 20% Truck Drivers has Driving License.

No risk coverage or Insurance. 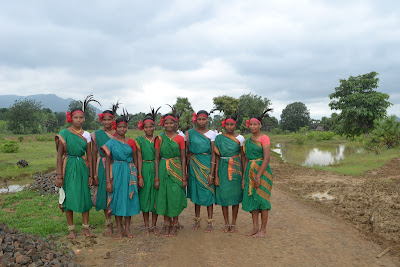 Most of the laborers are teenage Tribal girls (dropouts).

No Insurance to Laborers.

There are incidences which are not noticed by anybody.

No risk coverage or Insurance.
Payment details of loading labor:

Majority of Tractor Owners pay after they get payment or very late.

Labor used to make rounds to the owner house for payment.

There are incidences of nonpayment.

IGNORANCE OF WELFARE SCHEMES OF UNORGANISED SECTOR.
Asha (Association for Social and Humanize Action) has conducted a field study during the month of August, 2011 observed above facts and thought to organize a meeting with Youth for unionization of loading labor at Mandal level.
Asha workers met all the loading Jattus in surrounding 12 villages and explained the need of unionization. On 15th August, 2011 Asha organized Youth Festival and a meeting with all the Loading labor in Mandal. 122 tribal youth attended the meeting cum event (Most of the youth are girls between the age group of 15 to 18 years) where the idea of unionization is discussed in length. All the members agreed to form into a Group and propose to meet weekly on every Wednesday. Wednesday is Sandy day here in Chinturu Mandal Head Quarter and all labor gets their payment on this day.
The meeting resolved that Asha should make Draft guidelines, Rules and Regulations for the Mandal level Union. Members proposed to Name the Union in next meeting. An idea is evolved among the group to make some amount of thrift in every month.
Asha wish to organize this group as organized Sector and entitle the members for all provisions of Government.
We seek cooperation from supporters to continue the process of unionization. 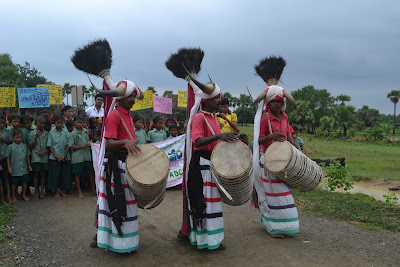