Skip to toolbar
Skip to content
http://www.docstoc.com/docs/87616475/Asha-profile
VEDURUKI ROGAMOCHINDI
(BAMBOO GOT DISEASE)
This boy Mr. Kadala Narsimha Reddy on 29th of July, 2011 came to our Cell shop. My younger son runs a Cell shop from where Narsimha Reddy purchased a Cell phone Brand Lephone (China Mobile) he brought the Cell for repair. Today I happened to sit in the shop counter since, my son gone outside for purchasing. And my elder son went to his office, so I forced to go and sit in the counter. Usually I didn’t go there. Observing the boys face thought He is from PTG village, I started conversation with him. The essence of the conversation is as follows:
Mr.Kadala Narsimha Reddy living in China thogu ( a village situated on a series of Hills) on the way to Kamanthogu a PTG (Primitive Tribal Group) Konda Reddy village. He answered to the question there are only 3 houses in their village. He never went to school, now he denying to go to school or camp. His brother Latchi Reddy only the boy who studied upto 2nd class in the village  Very recently our Project Officer walked up to the hills to meet the PTG people. He is very kind to sanction several schemes for the welfare and development of Konda Reddy. It become passion to every young Officer, particularly P.O.s of ITDAs visit Konda Reddy villages and make many promises to change their lives and attempt to ‘mainstreaming’ them. I am observing from several years, quite a number of P.O.s visited the Konda Reddy villages and made lot of efforts and money to do good to them. At last some Koda Reddy families were forcedly convinced to come down to Maddigudem and Boddugudem tribal villages and they were allotted sufficient land and developed that land, provided water facility and tractor in Maddigudem village. Unfortunately the scene is same as in the beginning. Many times I am wondering that money is poured like water and Government is committed to develop the PTG, but in vain. What is the reason behind? I some time feel that “These are all might not be their felt needs”.
I just asked the boy. Are you going for hunting? How many bow & arrows in your village? To my shock he replied, no we are not going for hunting and we have no Bow & Arrows?  Reason is that Bamboo is not available to make Bow & arrow and is completely vanished. Now new shoots are coming.  “VEDURUKI ROGAM VOCHINDI”.  I asked if any animal come in the Night how they protect themselves, replied we have banda katti. He worried that girls are dying in their villages. He has two sisters and two brothers. His parents died. His elder brother take care of the family members.

Please go through the below two Press clippings (color and white and black) about PTG Development initiatives and impact.

MOHUA NUT DEBARKING – A HECTIC TASK FOR TRIBAL WOMEN
Mahua: Madhuca indica A large, deciduous tree with a short bole, spreading branches and a large rounded crown.  Flowers (actually corollas)drop in March-April, fruit ripens during June-July.  Indigenous to M.P, Chattisgarh, Maharashtra, Gujarat, A.P. Orissa and extending north to the sub-Himalayan tract.  Common on village lands as it is protected for its corollas which are eaten raw, cooked or dried.  They are also distilled into spirituous liquor.  Oil from seed is edible and is also used for making margarine or soap.  Wood is of good quality and is used as a beam.  A good shade tree, young leaves bright pink.
In all Tribal/Agency areas  Mohua products are available in near Forest. Tribal women collect the flower, nuts from forest and private lands. And they extract arrack from Mohave flower after a long process of drying the flowers, soaking, cooking, extracting Liquor and sale at village. The tribal man use to drink this Mohua Liquor, women also drink. It is used like Tea in non tribal culture. Every woman takes one bottle of liquor made with Mohua to any cermonry she attends in her relatives family.
Mohua nut collected from trees are dried up in their home and debarking is a hectic task for women. The pulses they sold in the near market and brought their needy groceries. Most of the product from Andhra Pradesh goes to Chattisgarh. Tribal family consume Oil (Edible)(?) extracted from the Mohua nuts.
IT WILL BE USEFUL IF WE DEVELOP AN INSTRUMENT WITH SIMPLE TECHNOLOGY AND WORKING WITHOUT ANY EXTRA POWER IS HELPFUL TO THE WHOLE TRIBAL WOMEN COMMUNITY. 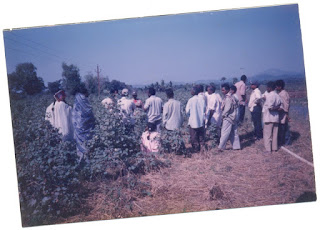 FLOOD RELIEF AND REHABILITATION-2006 :
INTRODUCTION: During 2006 floods of Godawari and Sabari rivers in Chinturu Mandal we have taken up relief programmes in Chuturu and Mukunuru villages of Mukunuru Mandal.  We have distributed food grains, Note books to Children, Clothes etc; to the (Flood victims) beneficiaries identified by the “VILLAGE LEVEL FLOOD MANAGEMENT COMMITTEE” formed by the villagers. This programme is supported through SECURE, Palvoncha by Centre for World Solidarity, Hyderabad.

QUANTITY DISTRIBUTED TO 304 FAMILIES OF TWO VILLAGES:
We followed up the relief activities with rehabilitation programme by providing financial support for House repairs damaged in Floods, ploughing the fields which are submerged and crop damaged, Cash to Landless poor etc; etc as detailed below:

Sri.Pujari. Pullaiah, Sarpanch, Mukunuru Grama Panchayath distributing the groceries in Mukunuru village.
We organized the victims to help each other in repairing their respective houses and we have provided cash support for their maintenance a token amount of Rs.1,500/- to fully damaged House and Rs.1,000/- for partly damaged house as follows:
SEED DISTRIBUTION: The Village Level Flood Management Committee (VLFMC) met along with all villagers to discuss about  needs of the victims.  The VLFMC discussed and resolved to obtain seeds for 2nd time sowing in the same season, since the crop was damaged during the floods. We approached the concerned Agricultural Officer Sri. Nayak of Chinturu Mandal.  He is very kind to extend his cooperation by providing subsidized seeds of two pulses Green Gram and Black Gram. The A.O. provided us some quantity of pulses as stocks available with him. Remaining quantity we purchased from open market.
STATEMENT SHOWING THE DETAILS OF SEED DISTRIBUTION:
We have organized the following awareness camps in  two villages as follows:
FORMATION OF BODHI GROUP: We have formed two Bodhi groups in Chuturu and Mukunuru villages to encourage Youth to organize themselves and maintain Library in their respective village. We encouraged  Hemandorf Yuvajana Sangham already existing in Chuturu village to take over the Bodhi group activities.
Bodhi, Hyderabad  provided the youth group with 30 books (selected for motivation Auto biographies of Tribal leaders).
SOCIAL AUDIT: Asha team with help of VLFMC and villagers has conducted social audit and estimated the Flood damage to individual property and common properties. The Grama Panchayath of Mukunuru resoluved to appeal Government of Andhra Pradesh for better rehabilitation.
The findings of Social Audit:
VLFMC FUND:
Asha organized a public meeting on 2nd June, 2007 and explained about the need of making a emergency fund which can be used in emergencies like flood, fire accidents and other immediate needs. The fund will be deposited in the Bank and will be operated jointly by three members one from VLFMC and one from Grama Panchayath and Asha representative.  Asha provided matching grant as follows: